Initiated in 2021, Cartier’s official partnership with the Venice International Film Festival – Biennale Cinema 2022 is part of the Maison’s cultural commitments in favor of the arts, and more particularly cinema. Through this choice, Cartier demonstrates its sensitivity to contemporary creation and to today’s film industry.

The history of Cartier is intimately linked to that of the arts, particularly cinema. In 1926, the Maison appeared on the screen in the film The Son of the Sheik, by G. Fitzmaurice, with the title role by actor Rudolph Valentino. He was the one who convinced the director to let him wear his Tank watch.

Others followed, and the legend was written. In Paris, in 1946, Jean Cocteau called on Cartier to make Josette Day cry diamond tears in Beauty and the Beast. In Hollywood, in 1950, Gloria Swanson lit up the screen in Sunset Boulevard by B. Wilder, adorned with two spectacular diamond and rock crystal bracelets.

Film after film, the stories intertwine, those of Cartier and of its customers, whether it is Grace Kelly who wears, for her last screen appearance in High Society, the ring that Prince Rainier gave her. Or the Mexican actress María Félix, known for her extravagant style, dressed in a landmark crocodile necklace.

Some of these jewelled testimonials are now part of the Cartier Collection and will be exhibited in Venice from 30th August to 11th September, on the occasion of the Venice International Film Festival – Biennale Cinema 2022. Created in 1983, the Cartier Collection is made up of approximately 3,500 pieces dating from the 1860s to the 2000s and constitutes a unique testimony to the history of the Maison’s style and creativity. This pioneering collection has since been hosted by more than thirty renowned institutions around the world for major monographic exhibitions.

The exhibition in Venice, designed by Sylvain Roca and curated by Jean-Pierre Lavoignant, cinema critic, will showcase: Platinum
Round old- and single-cut diamonds
Forty-seven rock crystal half-disks
Provenance: Gloria Swanson
The star (1899-1983) was then at the height of her fame, following her success in the early “talkies” (with movies such as What a Widow! and Indiscreet), and had just married Michael Farmer, the third of her six husbands. Not only does this flexible and dazzling bracelet figure in the history of jewelry, it also plays a role in the history of cinema, since Swanson wore it in at least two films: Perfect Understanding (1932) and Sunset Boulevard (1950). Entirely articulated, the two crocodiles can be worn separately as brooches. When worn around the neck as a necklace, the feet can be replaced by clawless paws that will not irritate the skin.

Made as a special order for María Félix
The actress María Félix (1914-2002), well-known in Mexico and France for films such as Emilio Fernandez’s Enamorada (1946), Jean Renoir’s French Cancan (1955), and Luis Buñuel’s Fever rises in El Pao (1959), was a true reptile lover and had a fondness for imposing jewelry. The Mexican diva and archetypal Latin femme fatale carried on her acting career until the late 1960s.
Length: 30.0 cm; length: 27.3 cm 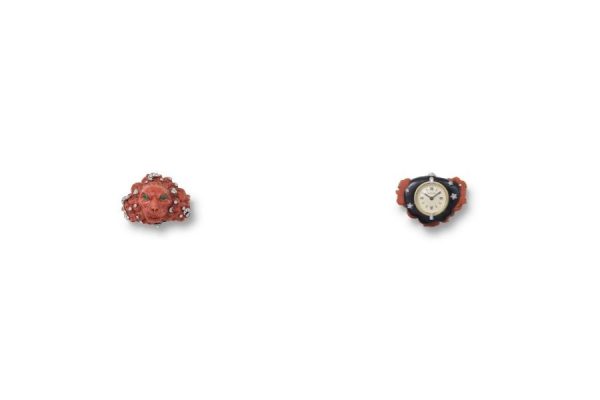 Provenance: Josette Day
The French actress Josette Day (1914-1978) started acting in the movies at the age of five. Her first major roles date from the latter half of the 1930s. She worked with directors such as Abel Gance (Lucretia Borgia, 1935), Julien Duvivier (L’Homme du Jour, 1936) and Marcel Pagnol (her partner during the war, who wrote the screenplay of La Fille du Puisatier for her in 1940). In 1946 Jean Cocteau asked her to play Belle alongside Jean Marais in Beauty and the Beast, and then cast her in Les Parents Terribles in 1948. In 1950 she married Belgian businessman Maurice Solvay and retired from the movie industry. Made for the film “Ocean’s 8”, the name of this necklace is a tribute to Jeanne Toussaint, Creative Director at Cartier from 1933 to 1970, who played an instrumental role in the Maison’s stylistic evolution. The original necklace, described as “the finest cascade of colored diamonds in the world”, was designed in 1931 by Cartier London. Only a design drawing of the original necklace and photographs of the jewel remain in existence today. For the film, the diamonds were replicated using zirconium oxides mounted on white gold.