He is unlike anyother. His fragrance trail is marked by originality, branded with a mysterious, midnight blue iron that defies convention in every aspect. Determined to write his own life, he makes the city’s heart beat to his own tempo, a rhythm that rises to a crescendo, becoming ever more vibrant and enchanting, a reflection of himself: BLEU DE CHANEL. Breaking with tradition, daring to step off the beaten path, exploring new territories: this is the essence of a CHANEL fragrance. Embodying this avant-
garde philosophy, BLEU DE CHANEL opened up a new olfactory path, looking beyond the status quo to create the color of a new, urban and modern horizon characterized by the unique accent of an aromatic-woody scent. Since it launched in 2010, BLEU DE CHANEL Eau de Toilette has become the emblem of a new form of masculinity that refuses to be bound by conventions. The fragrance of a man who disregards pretense and is not afraid to show the sensitive side that lies beneath his strong character.

Carried by a musicality that expresses the power of its nuances, the various facets of BLEU DE CHANEL and its aromatic-woody body are explored through three interpretations. More than simple variations that intensify the notes of the original, CHANEL put deep thought into each of them, bringing to life a sensual Eau de Parfum in 2014, followed by a sophisticated Parfum in 2018. Each one reveals its own elegant, magnetic facet and distinct signature.

In the distance, drums set the pace. The cymbals quiver and strike their chords to the rocketing tempo of BLEU DE CHANEL Eau de Toilette. For this first opus, Jacques Polge* chose to experiment with paradoxes, designing a scent that pairs citrus with a powerful aromatic accord. The electrifying energy of this fresh, luminous trail is warmed up by dry cedar notes, joined by New Caledonian sandalwood. The metronome picks up. The snare drum pulses out a rhythm that grows ever more hypnotic. Marked by the brightness of a range of citrus notes and an aromatic accord, BLEU DE CHANEL Eau de Parfum radiates freedom. For his second composition, Jacques Polge brought out the most nuanced facet of vetiver: its freshness. The perfumer enveloped it in the full-bodied, sensual notes of cedar and amber.

The bass drum is already booming. Now in the hands of Olivier Polge**, its power explodes, its depth imparted to BLEU DE CHANEL Parfum. A precious accord of cedar and New Caledonian
sandalwood prolongs its aromatic freshness. Rich, its depth reveals a sophistication that is limitless, creating a mysterious, unique alchemy between scent and skin.

THREE CHROMATIC VIBRATIONS IN A BOTTLE Broad shoulders, a build that exudes confidence: monolithic, the BLEU DE CHANEL bottle is radical in its simplicity. Minimalist and efficient, it is designed for a man’s hand. Opening with a smooth, clean motion, its magnetic cap combines aesthetics with functionality, a principle that is dear to CHANEL.

Its shape is of the utmost elegance, immersed in a specially designed shade of blue. Neither dawn nor dusk, too blue to be black and too black to be blue, this complex shade unfurls in a mysterious play of shadow and light. For the Eau de Toilette, it bursts forth like a blue neon light in the dark of night. Denser, it becomes almost metallic as it merges with the Eau de Parfum. Its hue is so deep that it literally flirts with total darkness, concentrating the intensity of its pigments to unite with those of the Parfum. A shade of blue that is indefinable from every angle, elusive in its wavering reflections.

THE EPITOME OF A FREE MAN 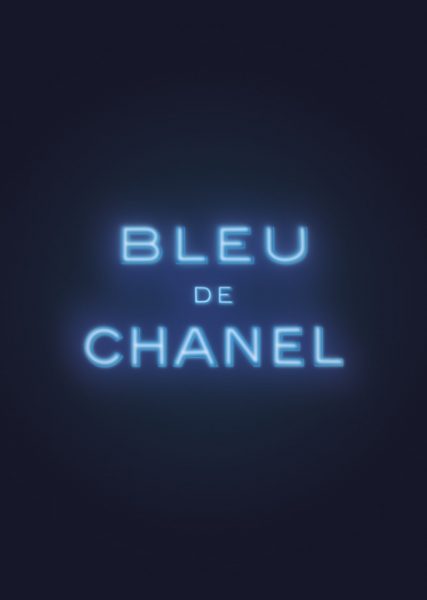 Refusing to be boxed into a stereotype, he embarks on a quest for self-discovery, following nothing but his instinct into a city that he has claimed as his own. Beneath his feet, the megalopolis lights up in blue. The music swells as he passes, his pulse quickening, and trails the mystery of his sensual silhouette, which cannot choose between shadow and light. Charismatic and magnetic, he sees beyond a destiny that has seemingly been mapped out for him, preferring to find his own path along the infinite horizon of possibility. In all its variations, BLEU DE CHANEL embodies every one of his personality traits, every nuance of his genuine masculinity.

Unexpected and contrasting, BLEU DE CHANEL has captured the spirit of its time and transcended it through the timeless, modern quality of its three interpretations. Vibrant with emotion in all its variety, it has become the fragrance of a captivating man and is a reflection of his confident, yet sensitive personality.